As this year marks 20 years since the fall of apartheid, the International Campaign to Abolish Nuclear Weapons (ICAN) wanted to celebrate South Africa’s 20 years as a democratic country, by hosting a conference in Oslo.

The event, From the end to the beginning – Celebrating 20 years of South African Democracy and Nuclear Disarmament, took place on the 12th and 13th of may, and was organised by ICAN Norway in partnership with nine Norwegian humanitarian and development organisations.

See more pictures from the conference here and the video here.

“The goal was to shed light on the experiences of South Africa”, explains Nosizwe Lise Baqwa, project manager at ICAN Norway, “and to highlight the intrinsic connection between current efforts to raise awareness of the humanitarian impact of nuclear weapons to achieve nuclear abolition, with the lessons learned from doing away with apartheid and ending legislated, minority rule. We are inspired by Nelson Mandela, who viewed the struggle against the nuclear weapon as inextricably intertwined with the struggles to end racism and colonialism. He fought for ending legislated, minority rule in all its manifestations, be it the apartheid regime or the international framework of the nuclear weapons regime.”

From the End to the Beginning featured many prominent speakers from Norway and South Africa. Jay Naidoo, Minister in Nelson Mandela’s government and Hans Brattskar, State Secretary at the Norwegian Ministry of Foreign Affairs, TDG Molaba, Acting Chief Director at the South African Department of International Relations and Cooperation, and Thorvald Stoltenberg, former Norwegian Minister of Foreign Affairs, amongst others.

Rev. Dr. Trond Bakkevig spoke about faith-based struggles for justice, and the role that churches played in the fight against apartheid. There were panel discussions on the dismantling of South Africas nuclear weapons programme, and on the role of civil society and trade unions in liberation struggles. There was also a debate on the situation in South Africa today, and a «Youth Indaba» with activists from Norway and South Africa discussing how we can engage young people and work together for a better future. There were musicians, bloggers and poets, sharing their views and experiences. Many of the speakers, both from Norway and South Africa, came from organizations who were actively involved in the struggle against apartheid.

“The idea to host this event came because South Africa and Norway share a long and healthy history of mutually beneficial partnership”, says Nosizwe Lise Baqwa. “It has its origins in the anti-apartheid movement and extends itself into 2017 and beyond. South Africa and Norway both formed part of the core group of likeminded stated that drove the process to ban landmines in 1997 and co-chaired one of the sessions during the Oslo conference on the Humanitarian Impact of Nuclear Weapons in March 2013. ”

The humanitarian initiative has come a long way since the Oslo conference. More and more states are starting to draw the political and legal conclusion from these conferences, and seeing the need for a legally binding instrument to implement the Treaty’s disarmament obligations. At the event in Oslo, Ms. TDG Molaba said that South Africa is “considering the possibility of hosting a fourth conference” to follow up on the Vienna conference on the humanitarian impact of nuclear weapons which is to take place in december this year.

“This is obviously a very promising development for anyone believing that the humanitarian initiative should initiate negotiations of a legally binding instrument prohibiting nuclear weapons. There is probably no country better placed to take this process forward than South Africa” says Beatrice Fihn, member of ICAN International Steering Group (ISG), adding that ICAN, a global civil society coalition of more than 360 organisations in 93 countries, stands ready to support South Africa, should it decide to host a conference.

“From our point of view, From the End to the Beginning was a great experience”, says Nosizwe Lise Baqwa. “This conferance was an endeavour to promote, encourage and strengthen our mutual understanding. We wanted to open the spectrum of thinking about Norway and South Africa’s bilateral work, and hopefully this will strengthen the existing humanitarian disarmament initiatives. And we are very excited about the opportunity to go to South Africa next, one step closer to banning nuclear weapons! 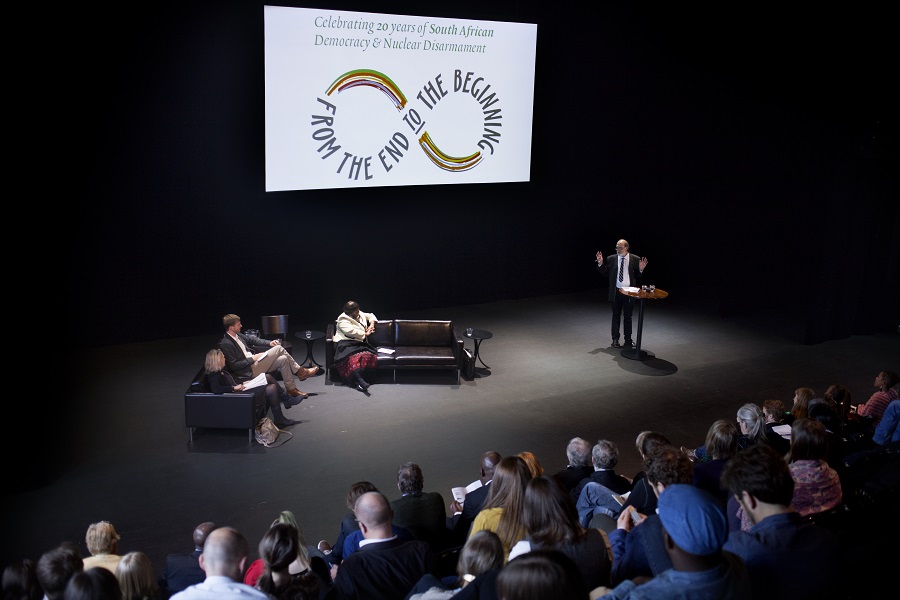 10 seire i kampen for en verden fri for atomvåpen!